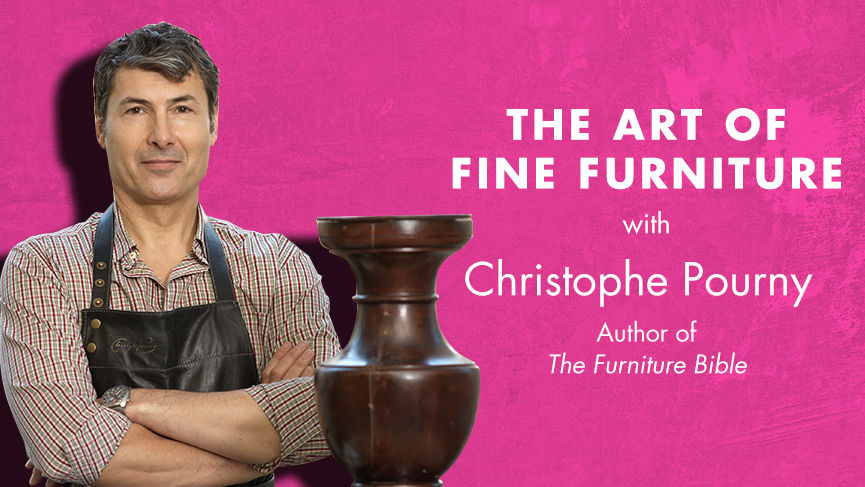 The Art of Fine Furniture

Watch as the author of The Furniture Bible describes how he came to write this highly respected work. The son of an antiques dealer raised in the South of France, he had no intention of following in his father’s footsteps. However, when Christophe moved to New York, he found that his background in, and knowledge of, antiques was a way to make a living.

When he began writing his book, he realized that it would ultimately be about more than refinishing or restoring furniture. He knew it was a way for him to:

Christophe describes how giving what is uniquely yours to give is the essence of art, and that since art involves an element of spontaneity, you can’t predict how or when it will appear. In fact, he feels that the belief that antiques must come from wealth or tradition, is incorrect, and that any piece of furniture—whether purchased at a shop or rescued from the curb—can be transformed into something unique and special, and you as the person who has created that change are now the first to ever own that specific piece.

One of the many excellent pieces of advice that Christophe offers in his Wynwood Talks is that everyone should have at least one piece of furniture in their home that is completely unique rather than just another mass-produced item.

One of Christophe’s most memorable projects was the restoration of George Washington’s writing desk. As he explains, Washington used the desk as president when the U.S. capitol was in New York. When the seat of government (no pun intended) moved to Washington, D.C., the desk stayed behind and was, for a time, put in storage and effectively lost. It was rediscovered in the 20th century, and 15 years ago Christophe was asked to become the caretaker of the piece, not only restoring it but giving it “checkups” at intervals thereafter. This, he says, is an example of how your experience can take you to unexpected places.

On Environmental Influences and the Relationship of Furniture to Life

Christophe points out in his Wynwood Talks that furniture styles have never developed spontaneously. They are always a response to something in the world around us. For example, he talks about how cabriole legs, with their “fun and light” shape developed as a response to the end of years of rule by a strict, authoritarian king.

Learn More About this Living Legend of Furniture Refinishing

Learn more about Christophe Pourny at his website: www.christophepourny.com. You can also purchased signed copies of The Furniture Bible and Christophe’s line of furniture care products at the site.